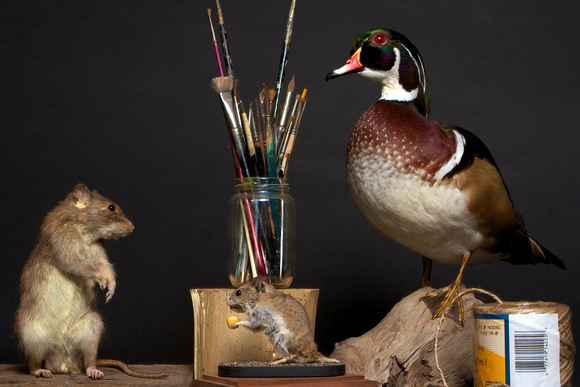 David James Schwendeman, recently deceased at the age of 87, was the chief taxidermist at New York City's American Museum of Natural History (AMNH)  for 29 years and was also the museum’s last full time taxidermist.

Upon retiring from the museum in 1988, David returned to work in his family's taxidermy business at the Schwendeman Taxidermy Studio, where he got his start as a young child. Founded by his parents, Arthur and Lillian Schwendeman in 1909, Schwendeman’s Taxidermy Studio  continues its operations today  on South Main Street in Milltown, New Jersey, under the long-time management of Bruce Schwendeman, David's son.

Although Arthur Schwendeman was a highly skilled taxidermist and his wife Lillian was an able partner who skinned specimens and made all of the artificial ears for their taxidermy studio, it was their second son David  who was the supreme artist in the family. Starting out as a very young boy earning pocket money in the family trade by scraping and cleaning animal skulls, David’s mastery of the art and science of taxidermy over time led to his being sought after and hired full-time by AMNH, following his graduation from high school and service in the Marines in the Pacific during World War II.

Steve Quinn, the senior manager of exhibitions at the AMNH and a longtime devotee of David's work, recently described David as "an extraordinary artist" and "an expert sculptor," who "could pose animals accurately and scientifically, and at the same time make them aesthetically beautiful. [David] saw as his goal to inspire wonder and nurture concern for nature.”

David viewed taxidermy as a scientific art form. Underlying his uncanny recreations of life was a deep devotion to wildlife, for David was also both an avid naturalist and an exacting purist.  “You have to have respect and intuition for the animals to bring out their best characteristics,” David explained to Melissa Milgrom in an interview conducted for her book, “Still Life: Adventures in Taxidermy.”   In this respect David epitomized the old-school taxidermist—a field naturalist who believed that the only way to replicate animals was first to study them in their native haunts.  As Ms. Milgrom observed in her book, "David [was] a birder’s birder....He [preferred to view] a common species a million times just to see sunlight hit its covet feathers, than to see an exotic species for a nanosecond and then race off to see the next one.”

At AMNH,  David focused primarily on birds, reptiles, amphibians and fish. Among his many noteworthy contributions is the taxidermy work appearing in the extraordinary Hall of North American Birds, including the bald eagles, wood storks, snow geese, bobwhite quail, and ring-necked pheasant. Specimens mounted by David are also featured in numerous museums across the country, as well as the National Museum of Athens, Greece.  In 1984, David was elected an honorary life member of the American Museum of Natural History.

David Bruce Schwendeman, David's son who goes by the name of Bruce, was born in 1951 and has worked for most of his life as the third-generation proprietor of Schwendeman’s Taxidermy Studio.  A graduate of  Rutgers University in Wildlife Management with a graduate degree in Zoology earned at North Carolina State University, Bruce has continued his family's legacy by also having become a taxidermist renowned for his meticulous work and scientific accuracy, as well a passionate naturalist scientist and lover of nature.

Like his father, Bruce grew up in the studio shop, earning pocket change as a young boy for every deer skull plate he scraped clean, while also absorbing his family's love of the art of taxidermy and the skills required to do it well.   He also learned invaluable lessons concerning the care required to preserve specimens. After years of apprenticeship under his father and grandparents, Bruce took over Schwendeman's Taxidermy Studio in 1977 when he was 26 years old.

Over the years, Bruce has expanded the family business to include educational, consulting, appraisal and restoration work, as well as specimen care and management, and today approximately three-quarters of the studio’s work  is done for museums, nature centers, private collectors and zoological societies, including the AMNH, the Smithsonian Institution and the Philadelphia Mumeum of Natural History and Philadelphia Zoo.

Bruce's largest project to date has been the Whale Project at the Vanderbilt Museum in Centerport, New York, but he is kept busy with numerous smaller and  often eclectic jobs that come in daily in addition to his taxidermy work. Recently, for example, he gave a pedicure to the polar bear at the Explorers Club in Manhattan, and restored the elephant head at the Harvard Club.

High-profile clients also come knocking at the studio door.  The Schwendeman Taxidermy Studio has been featured on the Martha Stewart television show, and several years ago Bruce's skills were required on the set for "Crybaby Lane," a Nickelodeon movie. Bruce has also overseen the creation of mechanical animals for window displays on Madison Avenue in New York, and the late news anchor Peter Jennings  sought out Bruce to rent a number of specimens for a party at his NYC penthouse.

In addition to its business operations, the Schwendeman Taxidermy Studio is also home to a vast collection of over 10,000 specimens that have been amassed by three generations of Schwendemans over the past century, ranging from insects, mammals, birds, reptiles, fish, rocks and minerals,  to more esoteric finds related to natural history.  With help from his sister Mary Ellen Davis and his nephews Jimmy and Justin Davis, Bruce hopes that both the family business and the studio archival collection will continue to be preserved and shared.

After graduating from Mount Holyoke College and Harvard Law School and departing from successful careers as a corporate attorney and investment banker in New York City to start a family, Lynn Savarese took up photography in earnest several years ago. While studying under fine arts photographer Lauren Krohn, as well as Harvey Stein of the International Center of Photography, Lynn sought out and pursued a variety of photography projects to develop her skills.  Although she had never had the slightest interest in taxidermy when she signed on as a volunteer photographer for the AMNH as one such project, she quickly became intrigued by this art form after photographing some of the museum education department’s bird specimens for its digitization project. Finding that the standard side view full body shots she was asked to take to document the identity and condition of each specimen for archival purposes failed to do justice to the unique qualities of each bird, Lynn soon felt compelled to take more intimate portrait pictures of each bird as her own personal tribute to them, in a manner meant to convey the fuller story of their recreated life and tragic demise. For Lynn, these badly neglected specimens, often damaged from decades of inattention and mishandling, still evoked extraordinary charisma, while also serving as powerful visual metaphors to convey the endangered lives and threat of extinction facing many bird species today.

Over time, shooting these specimens up close grew increasingly fascinating and haunting.  Lynn found herself overtaken by the heartbreaking charm of the birds, and their embodiment of the intense juxtaposition of life and death. Wanting to learn more about this strange art form as well as the creators of these museum specimens, Lynn turned to online research. Thanks to a Google search,  Lynn came across the names and backgrounds of both David and Bruce Schwendeman and, after mustering up her courage, gave them a call and invited herself to come visit them at their studio in Milltown.

Many visits have followed that first meeting at the Schwendeman Taxidermy Studio, as Lynn remained drawn to the extraordinary collection of taxidermy on display there as well as the stories told by Bruce and David about their art and adventures. Happily, she discovered that she could make herself useful to the Schwendemans by photographing their collection for archival purposes, while also being allowed to engage in more intimate photographic portraiture. This web site, together with a book in progress that Lynn is working on which features photographic portraits of specimens from the Schwendeman taxidermy collection as well as some of the stories underlying their creation, are intended to pay tribute to the Schwendeman artists, and to the disappearing art of taxidermy generally.

In addition to her ongoing projects at the Schwendeman Taxidermy Studio, Lynn is kept quite busy with commercial photography assignments for a variety of clients including a prominent NYC event planner and  a women’s sports clothing company, as well as portraiture work and other fine arts projects, some of which can be viewed at lynnsavaresephotography.com.